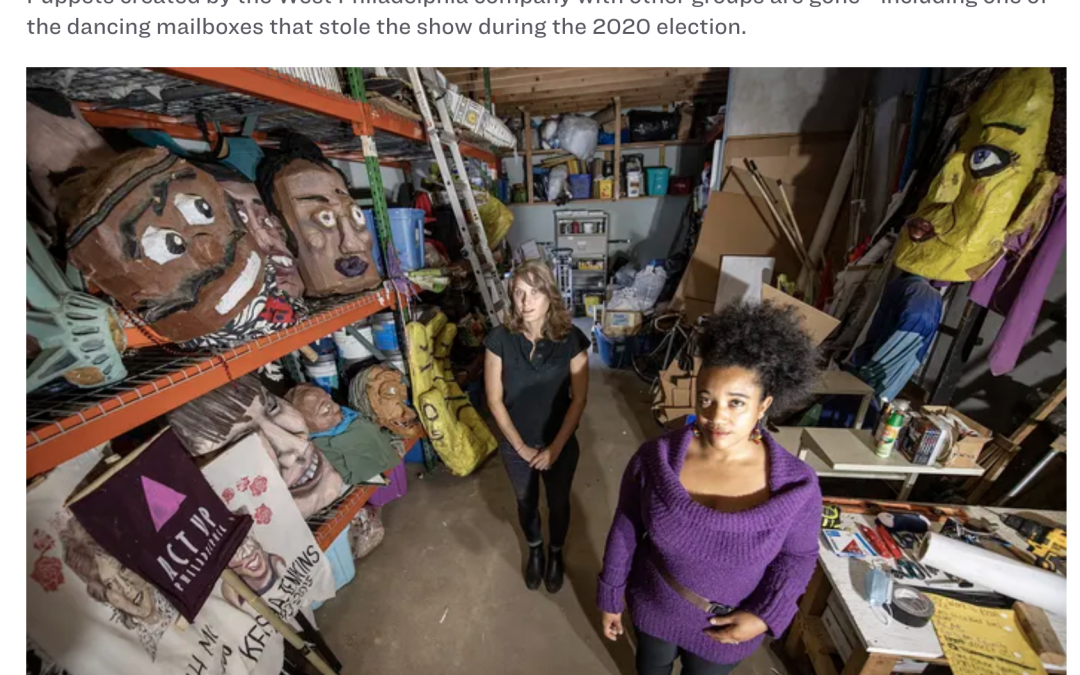 Thanks to Peter Dobrin for this article about Ida flooding, our puppet collection, displacement and need for a forever home. Link in our bio to read the full article.

Remember the dancing mailboxes from a demonstration outside the Pennsylvania Convention Center last November?
.
The star mailbox and many other of @spiralq‘s puppets were lost in the flooding from remnants of Hurricane Ida.
.
The West Philadelphia art-as-protest group was in the midst of looking for a new headquarters, and while a new home was being sought, the troupe’s landlord was offering the space in Mont Clare, across the Schuylkill from Phoenixville, at a significantly reduced rent. Meanwhile, it moved its puppets, signs, and other artifacts of their quarter century of history into storage.
.
A few months later, one September morning, their landlord texted a message and photo: the remnants of Hurricane Ida had swept through the area and the storage space was under seven feet of water. The majority of Spiral Q’s holdings, almost its entire history, was engulfed by the water and mud.
.
Spiral Q codirectors Jennifer Turnbull and Liza Goodell estimate that 65-70% of the company’s more than 2,000 artifacts were destroyed or damaged beyond repair, along with art materials, computers, and other equipment.
.
Now, as Spiral Q continues to recover from the deluge and considers where it might eventually find a new home, the group has mounted a $100,000 campaign to put it all back together. So far, almost half of that amount has been raised.
.
Read more at the link in our bio.
.
📸 by @jomoreno007 / Staff, Rebecca Blackwell / AP, Spiral Q, Joel Shaughnessy
📝 reporting by Peter Dobrin / Staff